Sterling is a brand of Kohler Company

Sterling Faucet Company was founded in 1907 and prospered for many years as a leading independent manufacturer of faucets and other brassware. In 1984 Kohler Company acquired Sterling to provide a foundation on which to build a mid-priced, full-line plumbing brand.

Bath products inspired by the realities of life

Sterling, a Kohler brand, and Sierra Remodeling pride themselves on providing reliable and affordable products that meet the real needs of real people. Their products can be installed quickly, can be cleaned with ease and offer proven performance day in, day out. And the sophisticated styling of Sterling products complements a wide range of decor – from warm and traditional to clean and contemporary.

Now you can arrange your shower exactly the way you like it. STORE+™ is a fully customizable storage system with movable accessories that eliminate clutter.

Cushioned, durable and easy to clean, the patent-pending ComforTrack is designed to change the way you feel about bath and shower doors. Here at Sierra Remodeling we have installed many comfortable and safe Sterling bathtubs and high quality shower doors.

Immerse yourself in style and comfort with Lawson air massage baths, whirlpools and traditional drop-in baths. Sierra Remodeling and Lawson give you the options of enjoying the warm massage of thousands of bubbles, the deep hydro-massage of directed whirlpool jets or the pure calm of still water.

Offering clean style and ergonomic design, we will install your Lawson product that features gently curved back and neck support, as well as armrests that offer added stability when you step in and out.

Let Sierra Remodeling make your laundry room remodel seamless and even more functional with a versatile utility sink from Sterling.

We can install your Latitude® utility sink as a freestanding, topmount or undermount sink, depending on the look and feel you want.

We can give you master bath luxury without the hassle of a custom installation using the Lawson Oval drop-in bath from Sterling. With elegant looks and durability to match, it also features water savings and superior durability.

Stinson® Toilet With Pro Force® Plus

Sierra Remodeling and Sterling offer you a Stinson Toilet with Pro Force Plus that saves you water flush after flush. In this video, expert craftsman and celebrity designer Chip Wade explores the Pro Force Plus flushing system on the Stinson toilet. 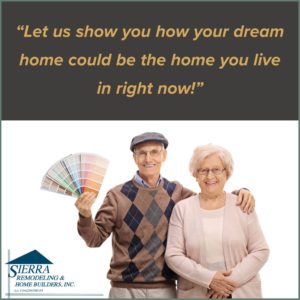